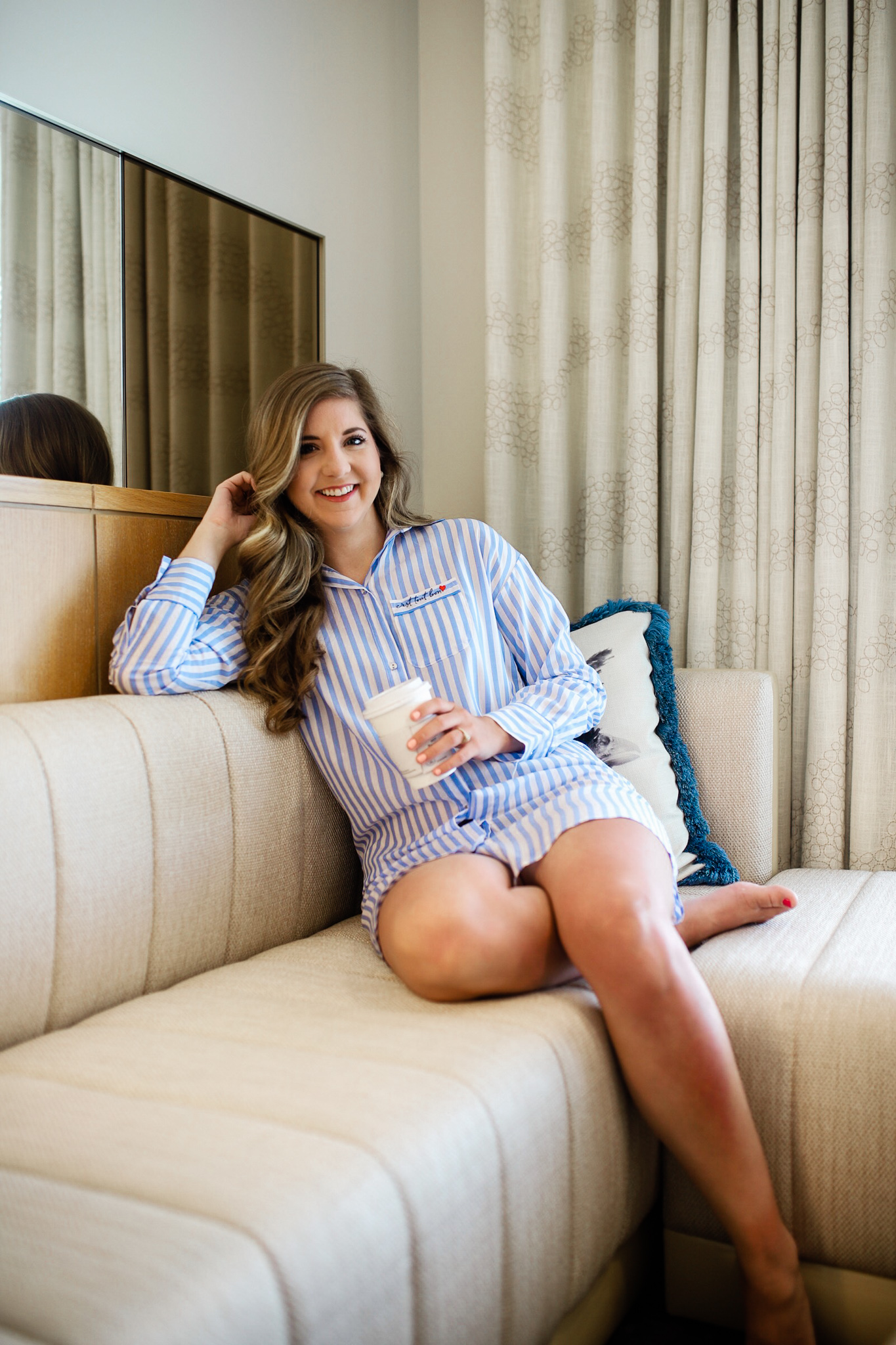 Jared and I enjoyed a weekend staycation at the 21c Hotel in Bentonville while also exploring the summer series at Crystal Bridges (read more about that here). We’ve walked passed this hotel so many times and even gotten drinks at their restaurant, The Hive, but never had the opportunity to stay here until now. Jared actually learned about 21c before we even moved here through a feature in Garden and Gun.

What’s unique about the 21c hotel Bentonville is it’s a boutique style hotel mixed with a museum. The hotel features over 12,000 square feet of art exhibition space, featuring some permanent pieces as well as different exhibits. I’ve never seen a hotel like this. The current exhibit is called “The Future is Female” which was all about girl power and feminism which I absolutely loved! 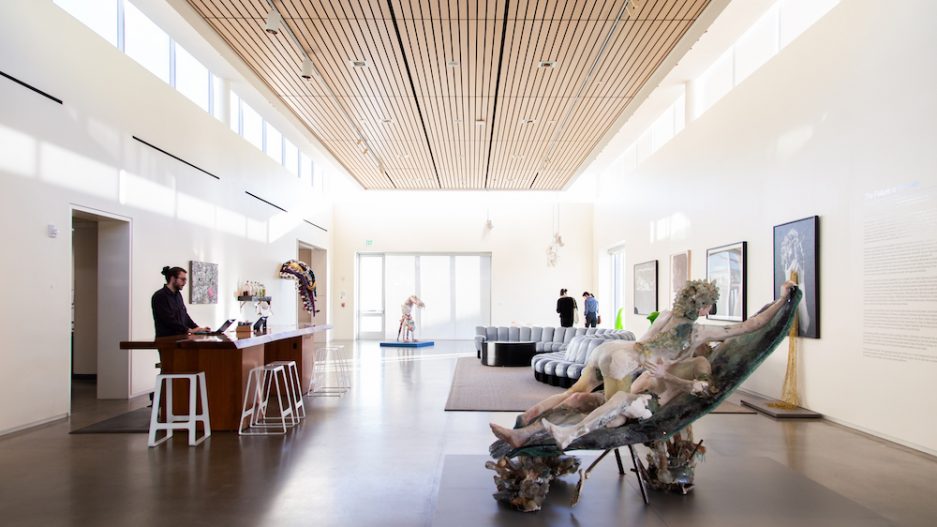 I just love Bentonville because it’s very picturesque, the square is like something you’d see out of a movie. The hotel is just a block off the square, so everything is completely walkable. There’s even a Walmart Neighborhood Market a block away if you need to pop over and grab something. I know we utilized this to grab some sunscreen.

Some of our favorite places close to the hotel are:

Our room was so spacious and open with several different sitting areas. They also had very convient light switches, which seems like a small thing, but there’s a light switch on each side of the bed, so you don’t have to get up to turn off the lights. 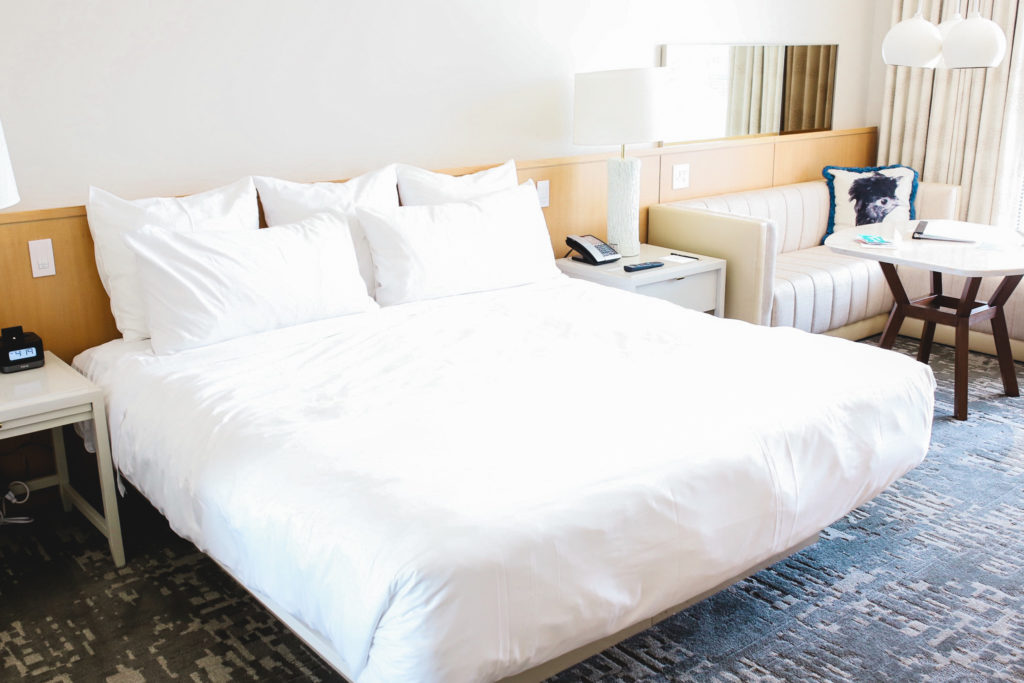 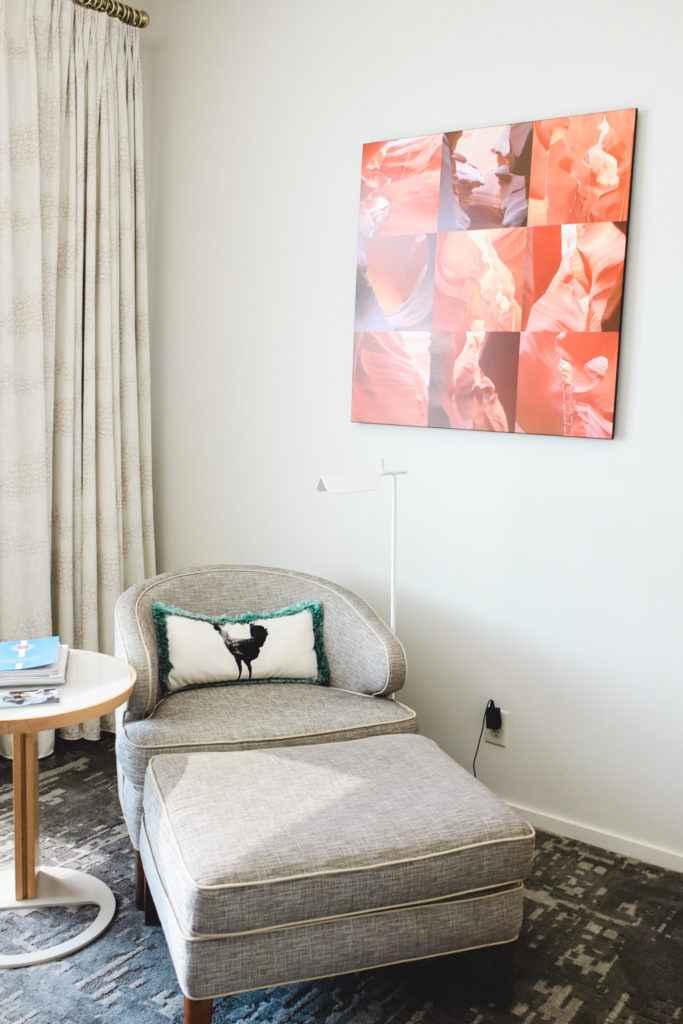 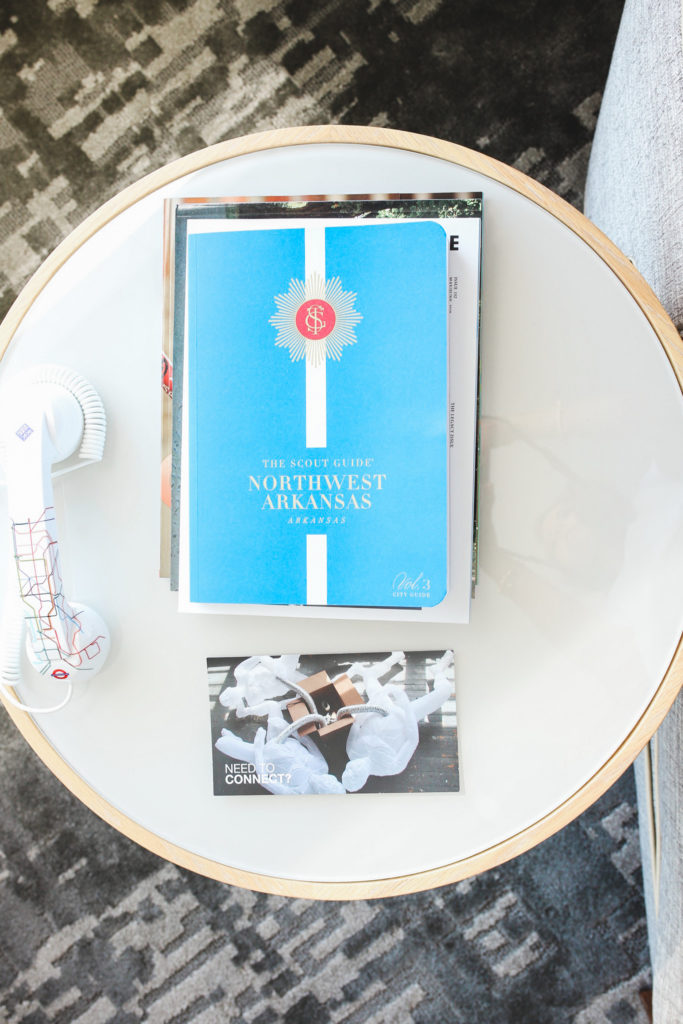 The bathroom had gorgeous brass detailing which is totally up my alley! 21c has products by Malin + Goetz which definitely came home with me. I loved the rum bar soap.

21c also offers free wifi and free parking which are major wins for me. Those are two things I absolutely hate paying for at hotels! 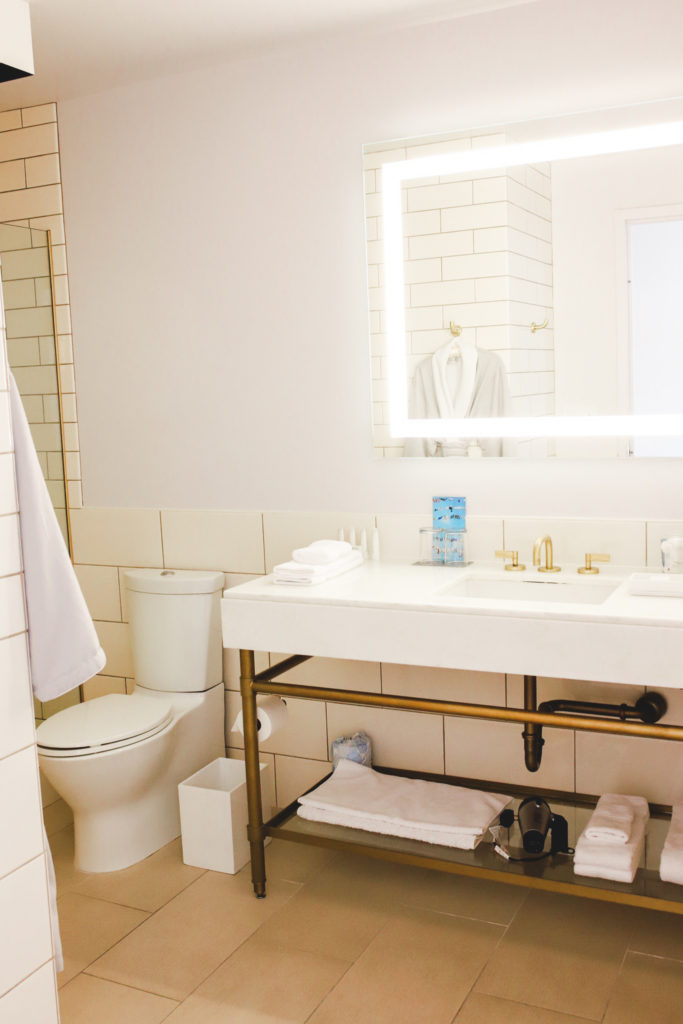 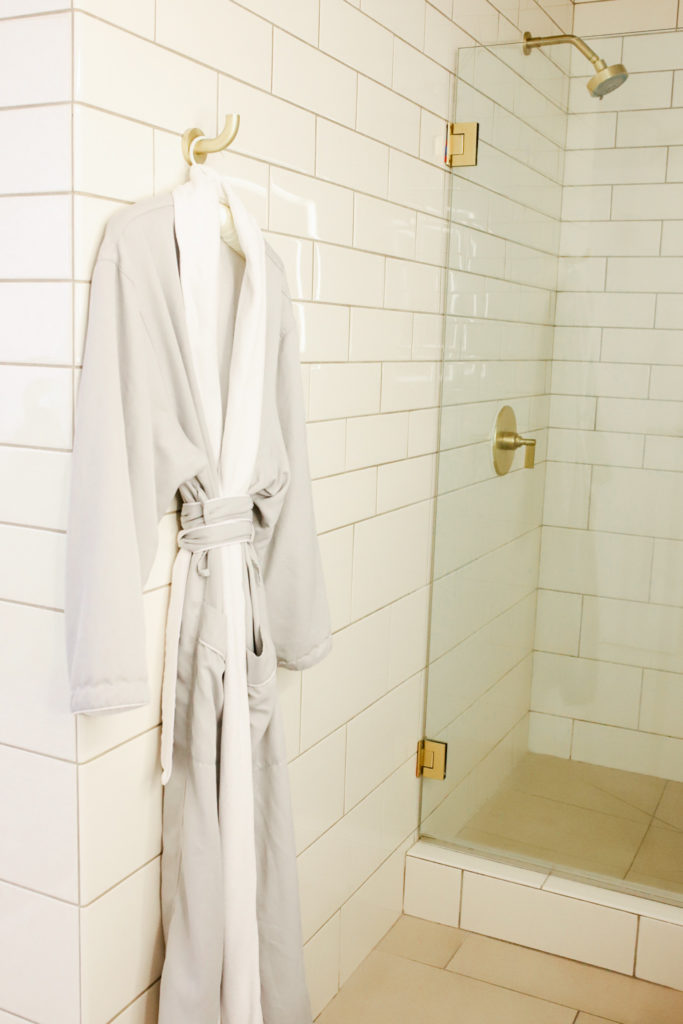 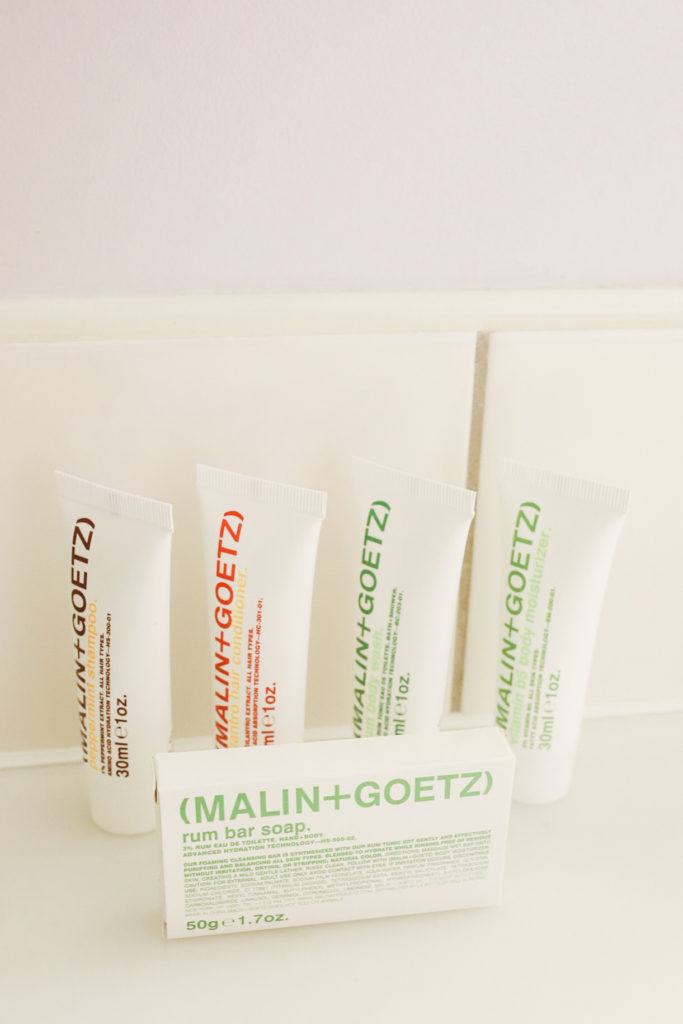 There are penguins throughout the entire hotel… yes, penguins. They are in the lobby, elevators, restaurant, rooms, wherever you least expect them! The penguins got started when they were first exhibited at 21c Louisville in 2006. The founders purchased the Cracking Art’s Red Penguin sculptures after seeing them perched around the city at the 2005 Venice Biennale as part of a public art project. Now each city features a different color representing their city. This is so fun and almost feels like a game as to where the penguins would be in our room or in the hotel. 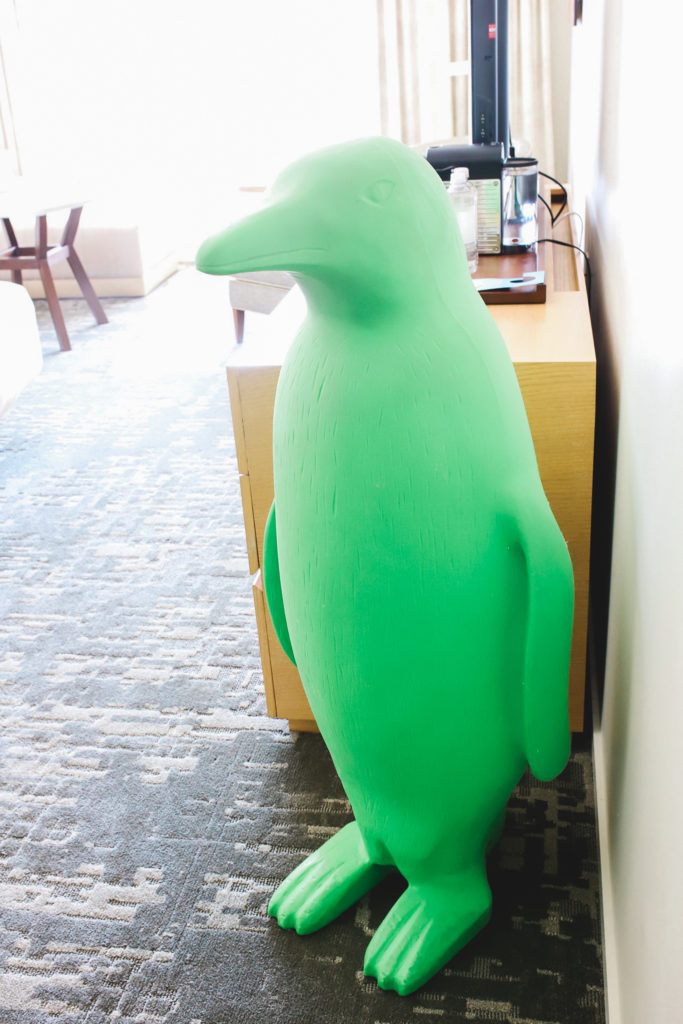 21c Bentonville also has a restaurant called The Hive. Everyone in this area raves about it. Their drinks are amazing and made famous in several publications. Their menu is just as delicious. I indulged in the grilled quail and Jared opted for the ribeye and we both split the charcuterie board for an appetizer.

You are also completed engulfed a beehive experience with art from Johnston Foster titled Buzzkill. This would be the perfect place to just grab drinks or a nice date night meal. The food is amazing, the drinks are amazing and the environment is amazing. You truly can’t go wrong with The Hive.

Overall, we had the best staycation in Bentonville at the 21c. If you are looking for something boutique and unique I highly recommend checking out the 21c Hotel Bentonville.